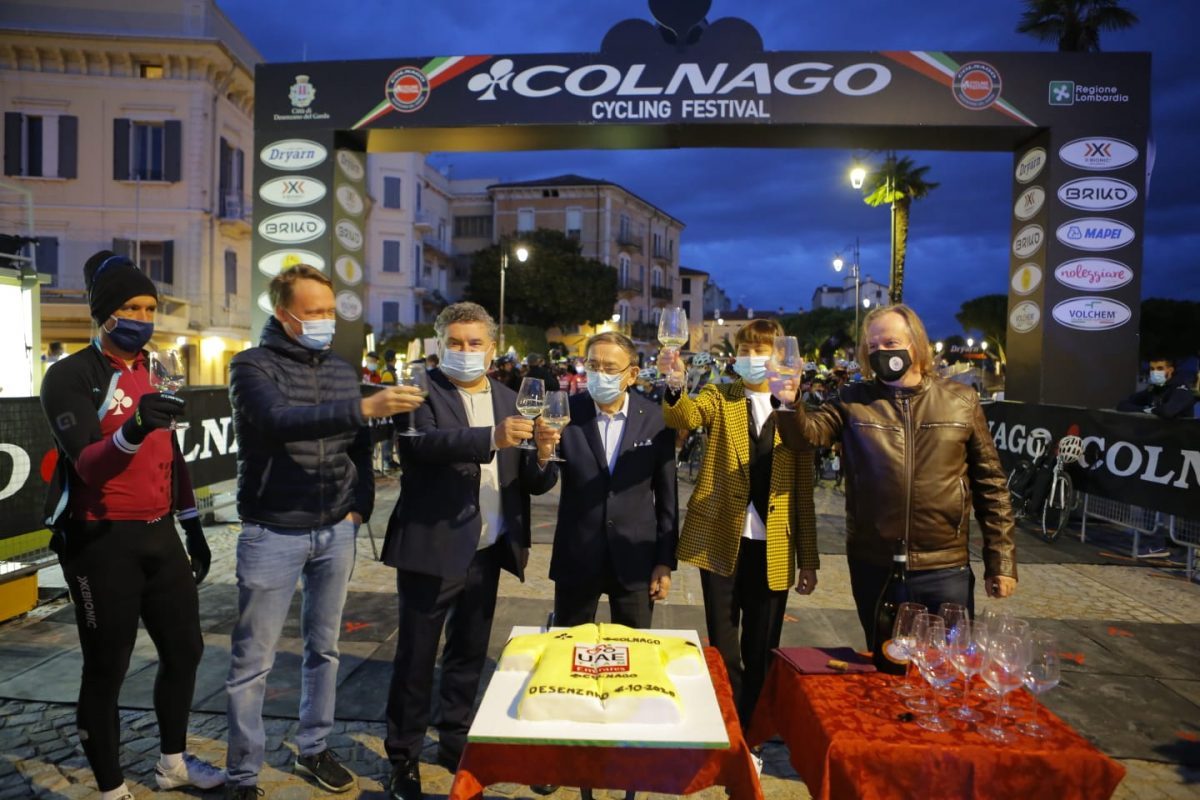 THE GRANFONDO COLNAGO SIGNS THE END
OF THIS EXCITING WEEKEND!

An extraordinary dawn that of this morning on the shores of Desenzano del Garda. At 6.00, with the arrival of the first cyclists, there was already a crisp air, full of emotions, tensions and agitation of pre-race.

Like every year, police and volunteers who menaged the situation perfectly, putting all of their efforts into the success of our Festival, even more than usual.

Shortly before the departure, set for 7.00, the now traditional toast took place, with the partecipation of the Councilor for Tourism of Desenzano del Garda, Francesca Cerini, the Councilor for Economic Development of the Lombardy Region, Alessandro Mattinzoli, Cavalier Ernesto Colnago and Paolo Savoldelli, who then started the race to conquer the Granfondo!

For such a special year, an equally special cake! To celebrate Colnago’s victory at the Tour de France, a cake in the shape of a yellow jersey!

An exciting departure, the lon parade of cyclists filled the lakefront in the first light of dawn, giving a breathtaking spectacle to those present.

After the start, the athletes of the Granfondo could choose between two routes: the medium one, 110km with a total altitude difference of 1384m and the long one, 145km, 2100m altitude difference. This last route allowed cyclists to touch three lakes: Garda, Valvestino and Idro. As in the previous editions, both routes reward participants with their spectacular landscapes, unmissable climbs and rich refreshments, which amidst typical delicacies and the smiles of volunteers are an opportunity to enjoy the hospitality of Garda and Brescia.

After more than a year of waiting since the last time, we have finally been able to get the satisfaction back on the faces of our cyclists, the fascination aroused by a territory that is affirming itself, every year more and more, as the paradise of the two wheels.

A vast territory is involved in the Festival, which takes place in 71 municipalities, 4 provinces and 3 regions only for the passage of the events: a dutiful thanks goes to the institutions that, believing and supporting the project, have collaborated for making Colnago Cycling Festival such a great event.

The arrival of the first finishers of the MedioFondo was around 10.00 am, that of the Granfondo at 11.00 am. Instead of the usually Pasta Party, everyone had the possibility to get their own bag lunch and have a break in the designated area.

The Award Cerimony took place at 2.00 pm. on the main stage signed Colnago, and saw the the awarding of categories and absolute winners of the Medio and Granfondo.

Once again the greeting was given by Francesca Cerini, who has always been a supporter of our Festival.  She thanked the participants “because the Colnago Cycling Festival is a source of pride and satisfaction for the Municipal Administration and all citizens.”. She also announced the new dates of Colnago Cycling Festival 2021, that will take place on the first weekend of April next year.ù

A great success for this special edition of the Colnago Cycling Festival! The weekend comes to the end with today’s Granfondo, a combination of sport, passion, but also participation from the entire territory. In fact, the Festival program is not designed to satisfy only the expectations of athletes, but also their families and anyone who wants to spend a peaceful weekend in the world of bike, in the city of Desenzano del Garda.

It seems just a moment ago since the cyclists of the Randonnée set off to discover the wonders of Garda on Friday.

The Colnago weekend in Desenzano also kicked off with the opening of the Expo Area, in which brands as X-Bionic, Briko, Volchem and Stepgear, exhibited their products and news about cycling world. The Expo village remained open util 10 pm all the weekend, to allow everyone to enjoy a day full of fun and learning.

As a tradition, saturday was dedicated to baby bikers, who amazed everyone with their MTBs and, for the first time, road bikes, performing a way that was worthy of the best cyclists. Who knows, maybe the next Tadej Pogačar is hiding among them…

Saturday evening was the perfect conclusion for a day full of emotions: the show of the Corona Events group amazed and left all the spectators brathless, performing in three itinerant shows between Lungolago Cesare Battisti and Piazza Malvezzi in Desenzano del Garda.

This Colnago Cycling Festival is definitely an event whose success, as in sport, is due to teamwork.

For this reason we want to thank the institutions and all the volunteers who led us to the victory during this weekend which, year after year, gains more and more consensus and participation. Three days filled with fun, landscapes and sport values!

As in every edition, a fundamental contribution was given by the police and the technical escort who guaranteed the participation and fun in complete safety.

In the end we would like to thank the over 1000 volunteers who worked behind the scenes to make the festival safe and even more beautiful; making it possible for every single mechanism of the event to work perfectly.

Once this special edition is over, all we have to do is to start working on the next appointment which will be, like every year, an unmissable weekend filled with passion, beautiful landscapes, and the best values that sport represents.