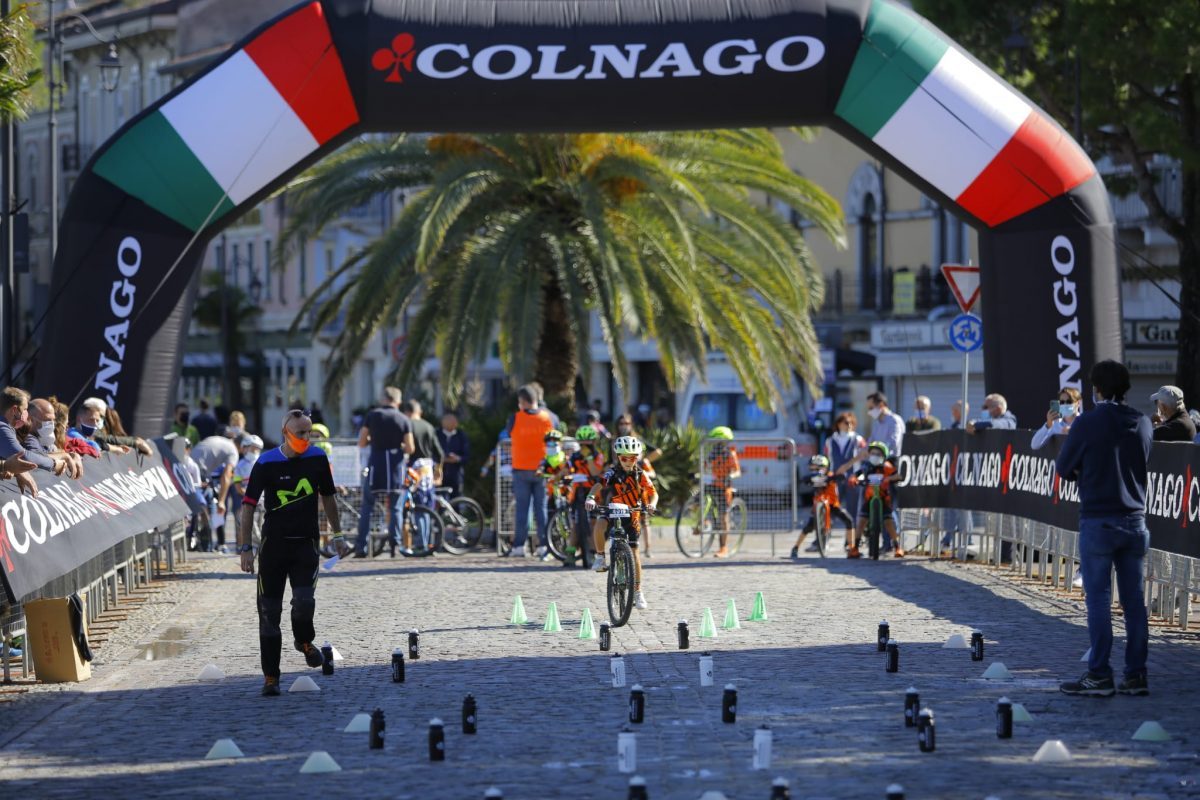 DON’T MISS THE STEAM DANCE TONIGHT AT 9.00 PM IN DESENZANO DEL GARDA!
TOMORROW AT 7.00 THE START OF GRANFONDO!

The rays of a warm sun illuminated this Saturday afternoon of October, welcoming the children, protagonists of this Junior Bike! At 2.00 pm on this beautiful second day, the little cyclists gathered on the Lungolago of Desenzano del Garda, giving to those present an unforgettable first Saturday of October, with the sound of energy, sport and entertainment.

For this year, we wanted to give the event a very special meaning: seeing these little athletes try this skill tese with a smile on their lips inspires a sense of real restart! For the whole afternoon, the energy, the joy and the life have colored the point from which the cyclists of the medium and granfondo will start tomorrow at 7.00!

Present at the event was the Councilor for Tourism Francesca Cerini who, before the departure, said she was satisfied for the beautiful day that would welcome the little athletes for an afternoon of carefree fun. She also thanked the volunteers and institutions that made possible the peaceful running of the event, the only cycling event dedicated to children in the province for this year.

Children have faced a skill test divided in three steps:

– the first was the so-called snowman, a space in which artificial obstacles such as cones and water bottles are arranged, and that young athletes must avoid;
– a second skill test which consists in passing on wooden boards;
-the third and last test with cones around which to do the slalom!

For the first time in the Junior Bike editions, in addition to the MTBs, road bikes of our future granfondisti also participated, one of the umpteenth novelties of this special edition!

Many satisfactions and emotions for today’s experience, but the day does not end here!

The town of Desenzano continued to breathe the air of Colnago Cycling Festival until late in the evening. The exciting atmosphere involved all the guests of this day thanks to the cyclists who populated the streets of the center, but above all the lively village of the Expo Area, dedicated to the brands of the sports sector and beyond, which will remain open until 10.00 pm. Among the brands: Briko, X-Bionic, StepGear and Volchem, sponsor of Colnago Cycling Festival 2020!

But the real show comes tonight! At 9.00 pm, on the Lungolago Cesare Battisti, the heart of this Festival, the artists of Corona Events group will parade in the magnificent Steam Dance, which will keep us with our eyes attached to the sky this evening on the banks of the our wonderful lake!

And another wonder will enchant all those who will be present tomorrow morning: the Lungolago Cesare Battisti will be filled with colors and bicycles for the start of the main event of the Festival, the Granfondo Colnago. From 07.00 am the registered cyclists will parade in front of the harbor, ready to face the routes designed for them by the organizing committee: the medium route with its 110 km in length and 1,384 m in altitude and the long route of 145 km for 2,130 m in altitude. The latter will touch three lakes, that of Garda, the lake of Valvestino and the lake of Idro, and other places in the province of Brescia that will surely be a pleasant discovery for all participants.

Two paths and a unique beauty, which has managed to impress and attract athletes from 23 different nations for an event that promises to become more and more international.

And if a large part is made up of the territory, which is establishing itself, year after year, a paradise on two wheels, to contribute to the success of this event is certainly also the imprint of its patron, Cavalier Ernesto Colnago, a man who has made and still makes the history of cycling worldwide thanks to his genius, his intuitions and his innate innovative spirit, who will be present tomorrow at the start of the Granfondo, together with the local institutions.

For tomorrow, the wish is to enjoy another splendid day, graced by the weather, doing lots of sport and cycling in the midst of scenarios that have no equal, protagonists Garda Lake and the entire Brescia province, united to make it possible the Colnago Cycling Festival an event with a thousand emotions.