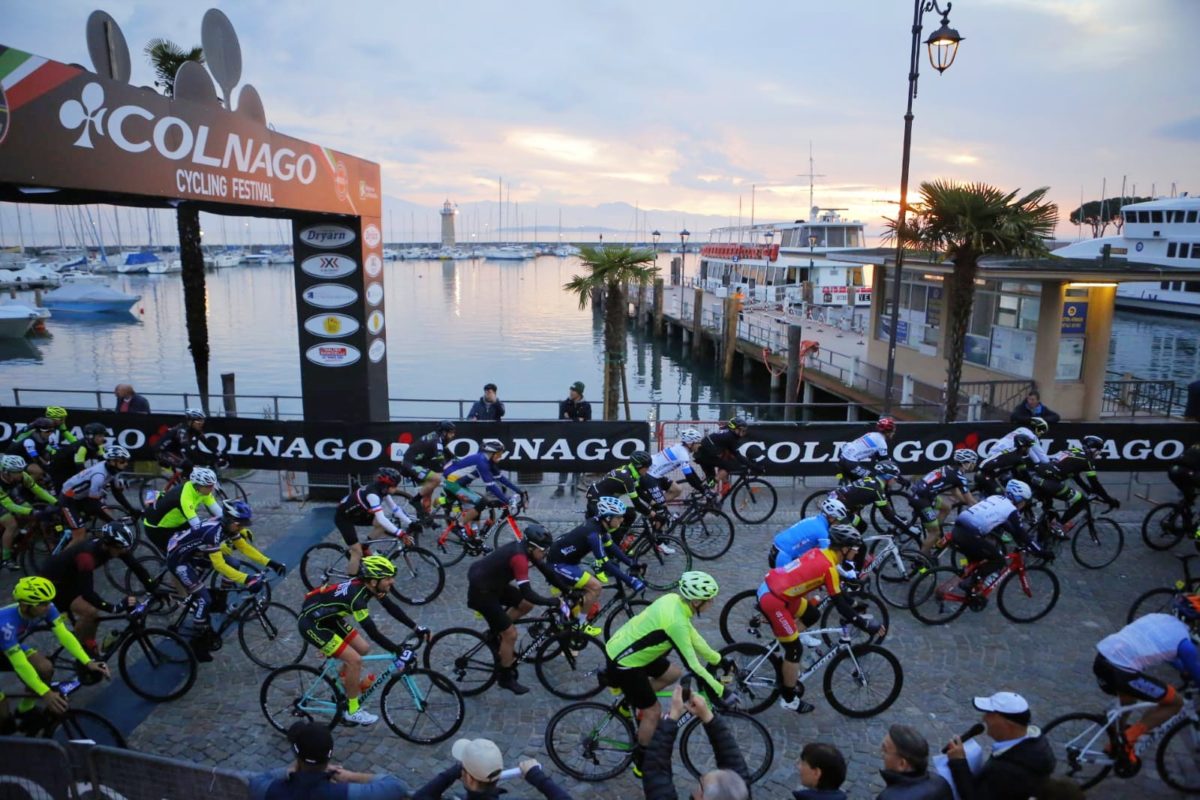 An international cycling festival in Italy, on Garda Lake

1000 volounteers, institutions and private sponsor at work for the same goal

A really great success for the 7th edition of Colnago Cycling Festival! This event has been over from few hours after three days of sport, show and activities for everyone, between the enthusiasm and the great participation of an entire territory.

This three-days-event had been organized in a really full schedule that was studied to satisfy not only bike lovers, but their family or Garda Lake regular visitors too. A lot of people ran to Desenzano del Garda, attracted by the festival offers, to pass a weekend in a party atmosphere.

Friday 5th April has been dedicated to Randonnée: 300 cyclists rided their bicycles around the enchanting Garda Lake for 145k for the short route, and 200km for the long one.

The weekend started also with Expo Village opening, an area that was dedicated to exposition of the most important sport brands. The Village has been crowded since Day 1, index of the interest that CCF can create on the territory and index of the quality of the brands.

Saturday has been a really special day because of the Junior Bike! The Lakefront of Desenzano was animated and “coloured” by hundreds of baby bikers, that have ride their bikes through agility tests. In the evening the most spectacular moment of the entire Festival: a fireworks show that left everybody without words and enchanted.

The perfect ending of these three days of fun has been the Queen of Colnago CF, the Granfondo Colnago: the race has made of this Sunday an undescribable day, since the start. It was an incredible emotion to see the thousands of colored helmets along the lakefront, to see the athlets jumping on their pedals and starting to ride their bike.

The cyclists went in north direction until Gardone Riviera and then the group split: someone turned left to ride in the medium route, that was long 110km; the other partecipants went straight to follow the new Granfondo Colnago long route. This new course go through some places that were never touched by Colnago CF, like Valvestino Lake and Idro lake, but as in the past edition there’s a thing that will never change: breathtaking landscapes and delicious and adbundat refreshments will be always a constant of the race!

The great hospitality of Garda Lake people was really apprecieted by all the athlets: their happy faces and their smiles confirmed it. This spirit is the force of this territory and it can transform a simple sport event in a big party for everybody, cyclists, families and tourists.

A spacial thanks goes to Institutions and Local Administrations that believe in Colnago Cycling Festival and make possible to organize and event that involves 5.000 athlets with their families and friends.
Colnago CF is a success of the hard team work: Institutions, sponsors and associations are the perfect ingredients of the recipe for this international event that’s getting stronger and it’s growing up year by year.

A fundamental contribution cames from volunteers: every year there are over 1.000 people that control the streets along the route, that organize all refreshments and make everything go in the right way. The goal is only one and it’s always the same: to make all participants feeling like at home and having fun in safety.

The seventh edition is over, and now we will start working for the new one, that we hope will be a can’t-miss date with good cheer, natural beauties and the best values that sport can represent and teach.